November has come. The rumored Apple October event didn’t arrive as expected. Hence the new iPad and MacBook series have not been announced yet. Nevertheless, there are still are some changes in Antutu's October rankings for iOS devices. How the list has changed? Check out our most updated Top 10 iOS list as measured by the average Antutu score.

1. Score: all the scores are averaged, not highest score per model (actual running results may fluctuate, which is a normal phenomenon).

Please note that while the Android list is based on Antutu V8, this month’s iOS list still uses the Antutu V7 scores, as the iOS version of Antutu V8 has just been released in November, to ensure a fair comparison we need to wait for one month to collect V8 data before releasing new iOS rankings based on Antutu V8. 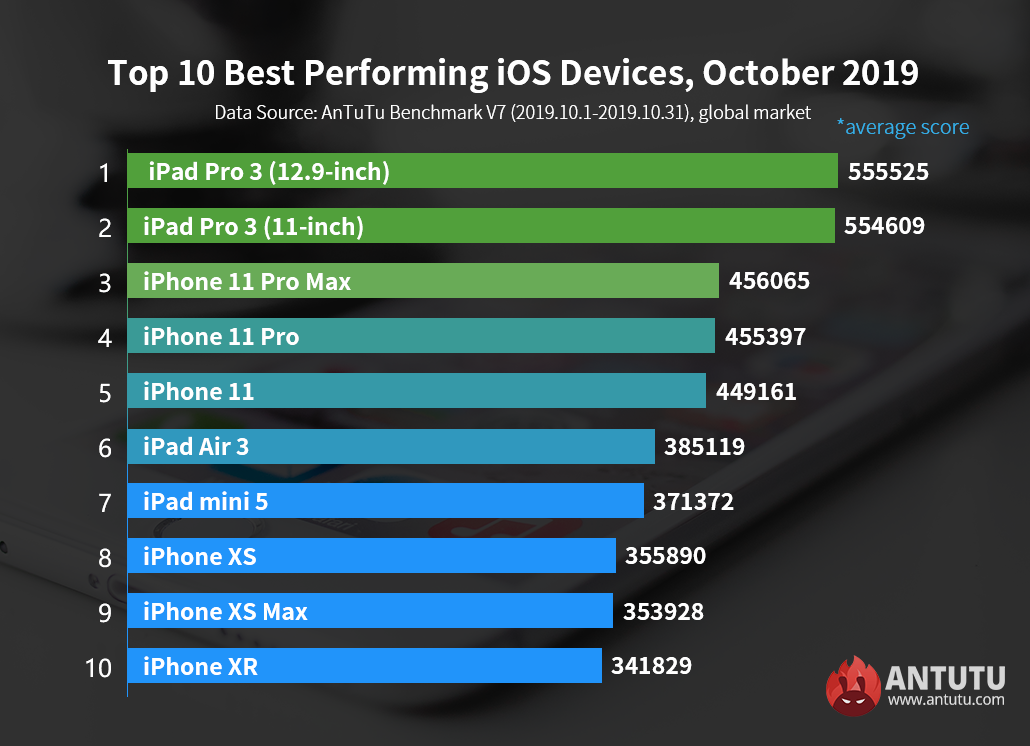 In October, the 12.9-inch iPad Pro 3 and the 11-inch iPad Pro 3 continue to occupy the top two positions with an average Antutu score of 555,525 points and 554,609 points respectively. Both iPads are powered by the A12X Bionic chipset, which has been released for one year but still powerful.

As for the reason why the A12X Bionic is not used in the iPhones, we have mentioned earlier it is because iPad Pro 3 can provide sufficient interior space and big battery for the A12X Bionic chipset, which iPhone, as a compact and easy-to-carry smartphone, cannot provide.

Above is the global Top 10 best performing iOS devices list for the month of October. For more information about the ranking list, please visit Antutu official website or download AnTuTu Benchmark and check in the menu of “Ranking”.